I have compiled a list of all known Wizards of the Coast printing errors and mistranslations. While most of these went uncorrected during their time, TCGOne has done a great job fixing these cards so that they can be played as the creators intended. 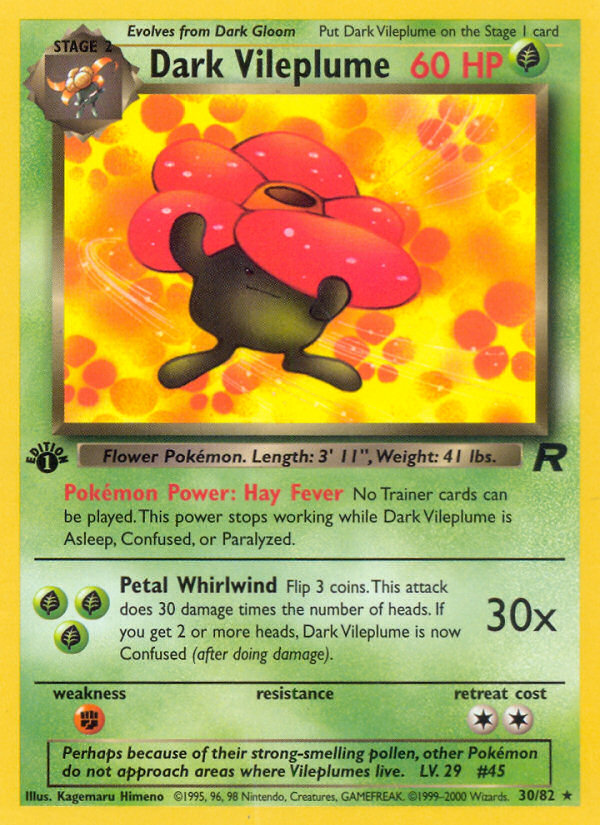 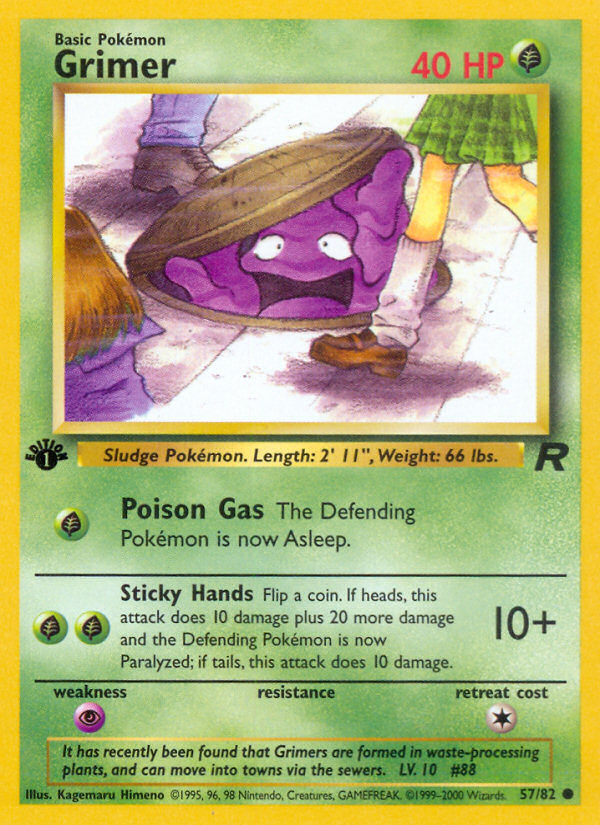 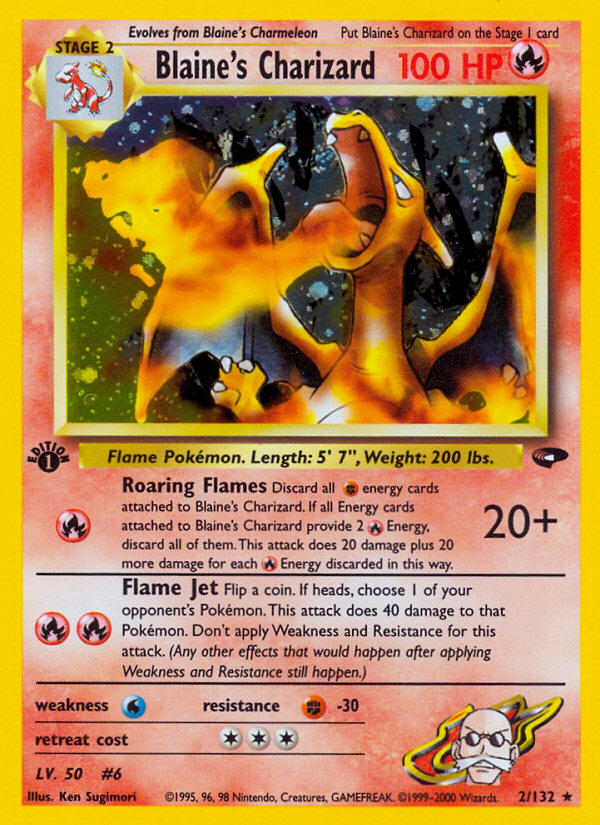 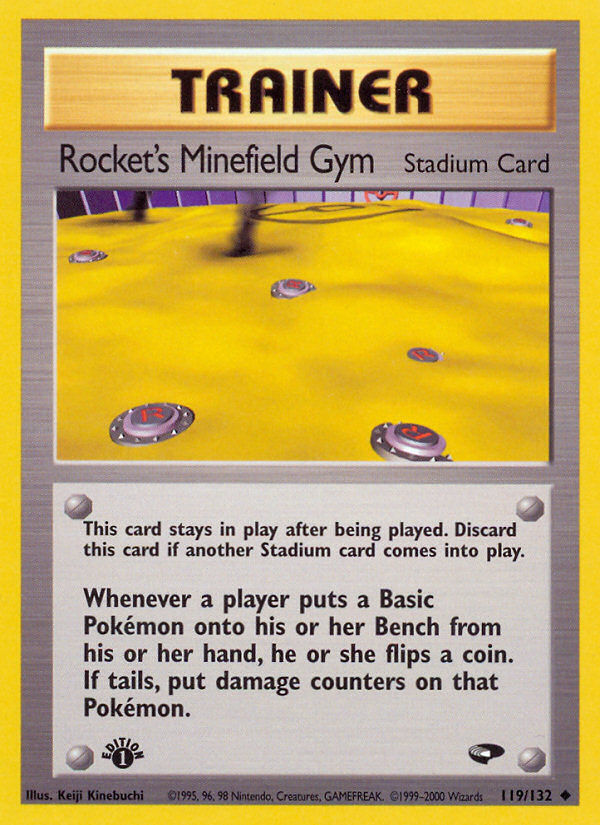 Rocket’s Mineshould should place 2 damage counters on the Pokémon. 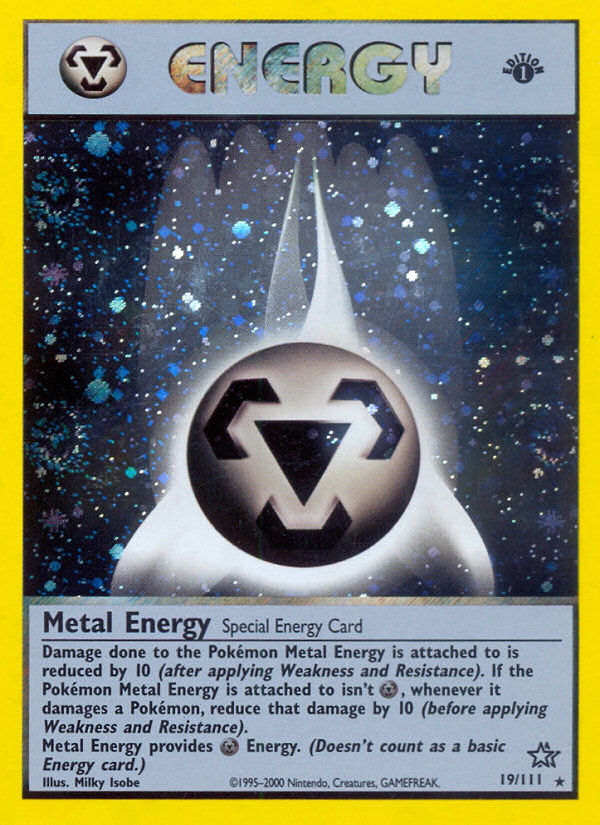 Metal Energy should only reduce damage received from attacks. This means Pokémon Powers like Dark Crobat’s Surprise Bite and Elekid’s Playful Punch should not have their damage reduced by a Pokémon with Metal Energy attached to them. 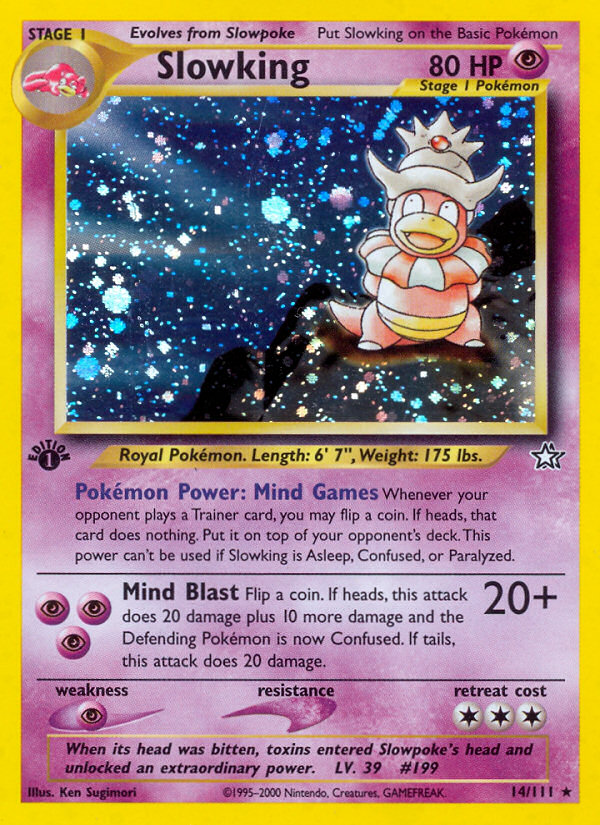 Slowking’s Mind Games should only work when Slowking is Active. 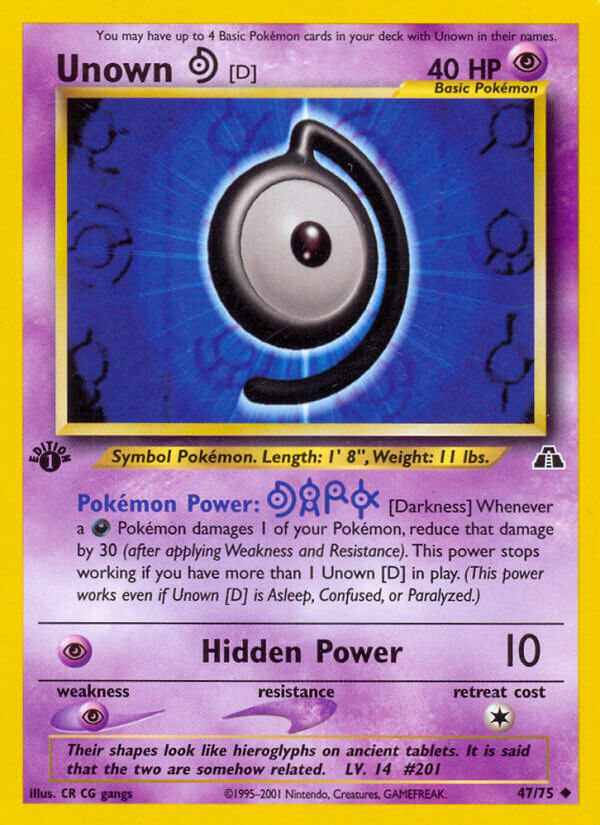 Unown D’s Darkness should only reduce damage done to your Pokémon with Unown in their name. 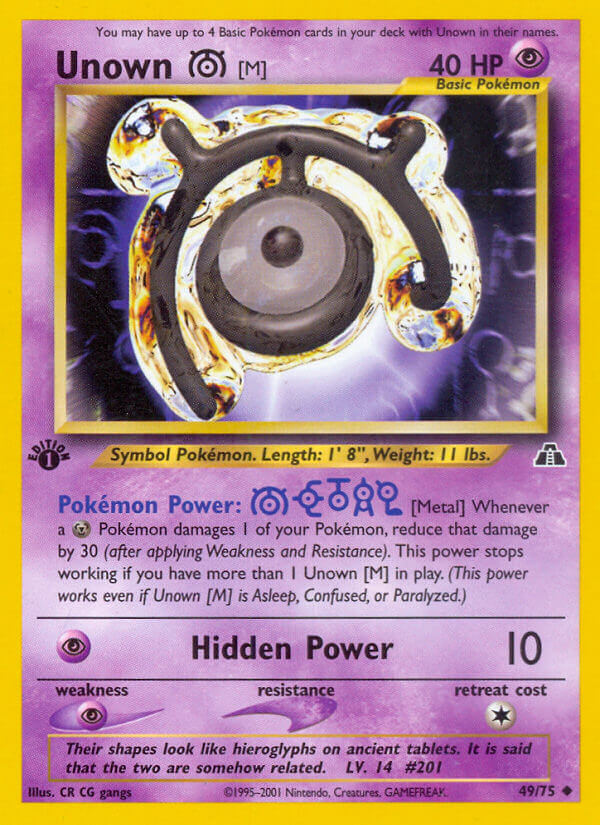 Unown M’s Metal should only reduce damage done to your Pokémon with Unown in their name. 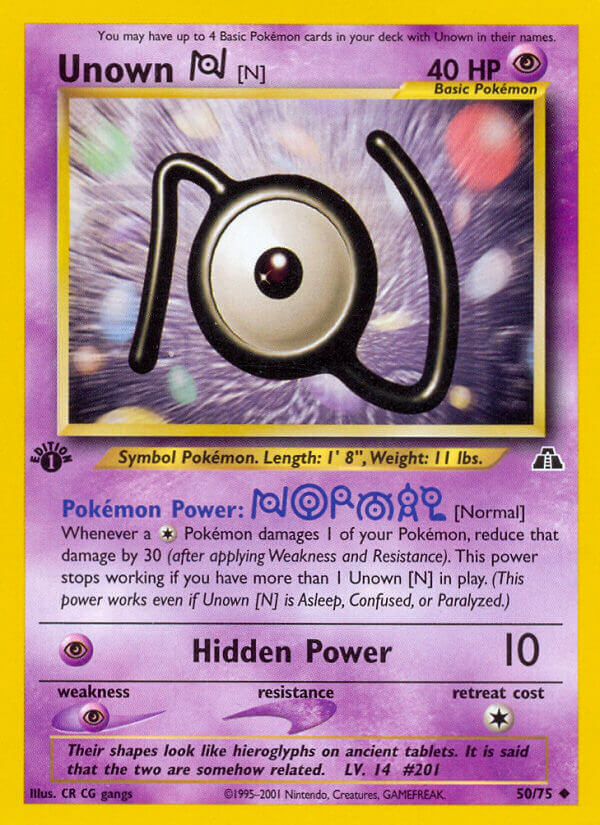 Unown N’s Normal should only reduce damage done to your Pokémon with Unown in their name.

Murkrow and Umbreon’s Feint Attack should not be affected by any affects on the Pokémon they are attacking, not just the Defending Pokémon, which, during the Wizards era, referred only to your opponent’s Active Pokémon. 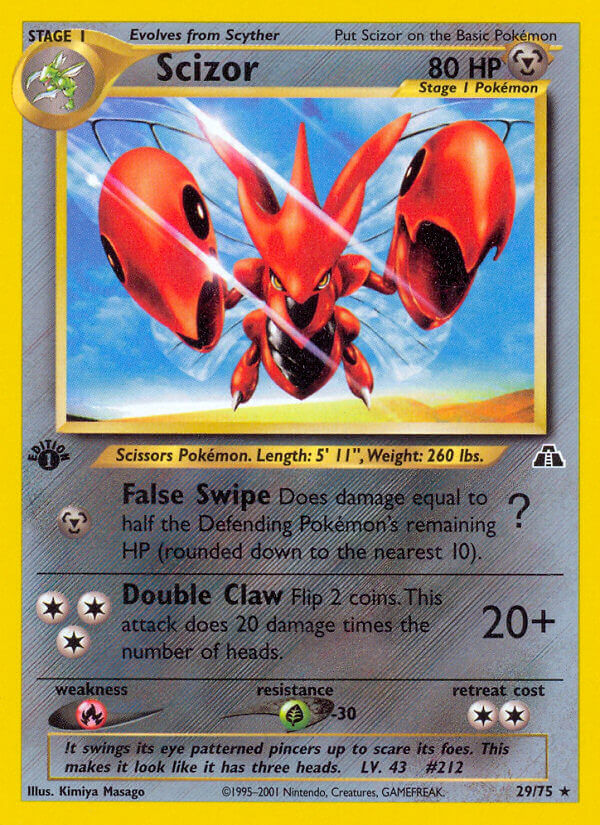 Scizor’s Double Claw should read as follows: Flip 2 coins. This attack does 20 damage plus 20 more damage times the number of heads. 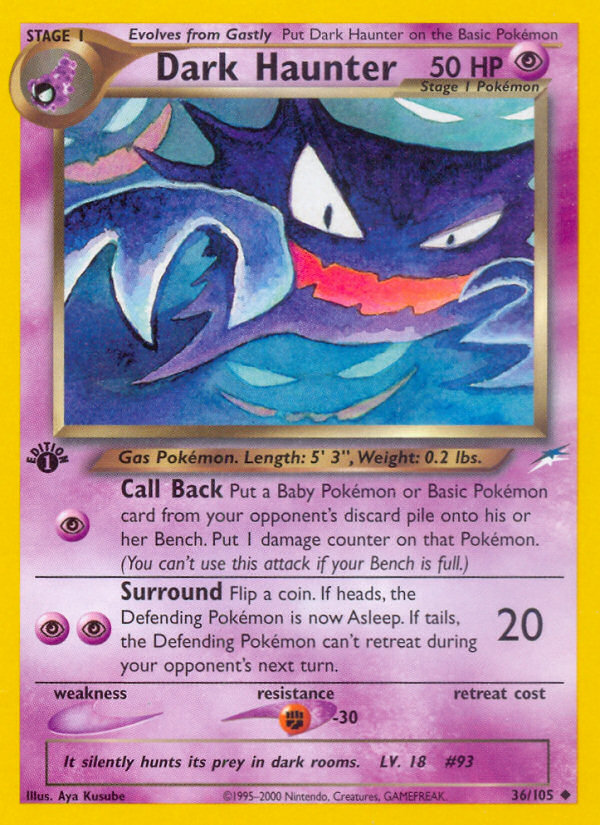 Dark Haunter’s Call Back cannot be used if your opponent’s Bench is full. Your Bench size of course does not matter. 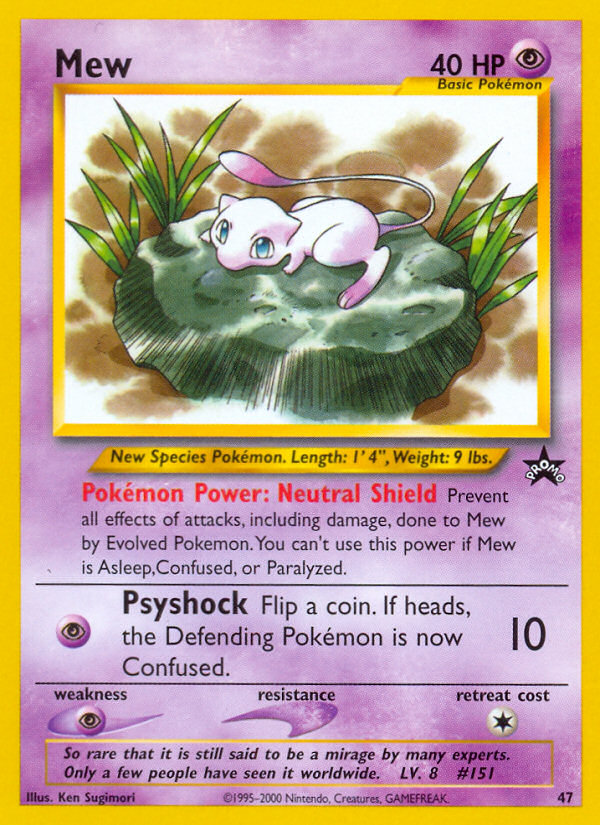 Mew’s Psyshock should leave the Defending Pokémon Paralyzed, not Confused.

Is it possible to add some kind of small “Errata” emblem somewhere on these cards so players know why their cards are doing something different? Or even customize the scans to re-write the mistranslated attacks? 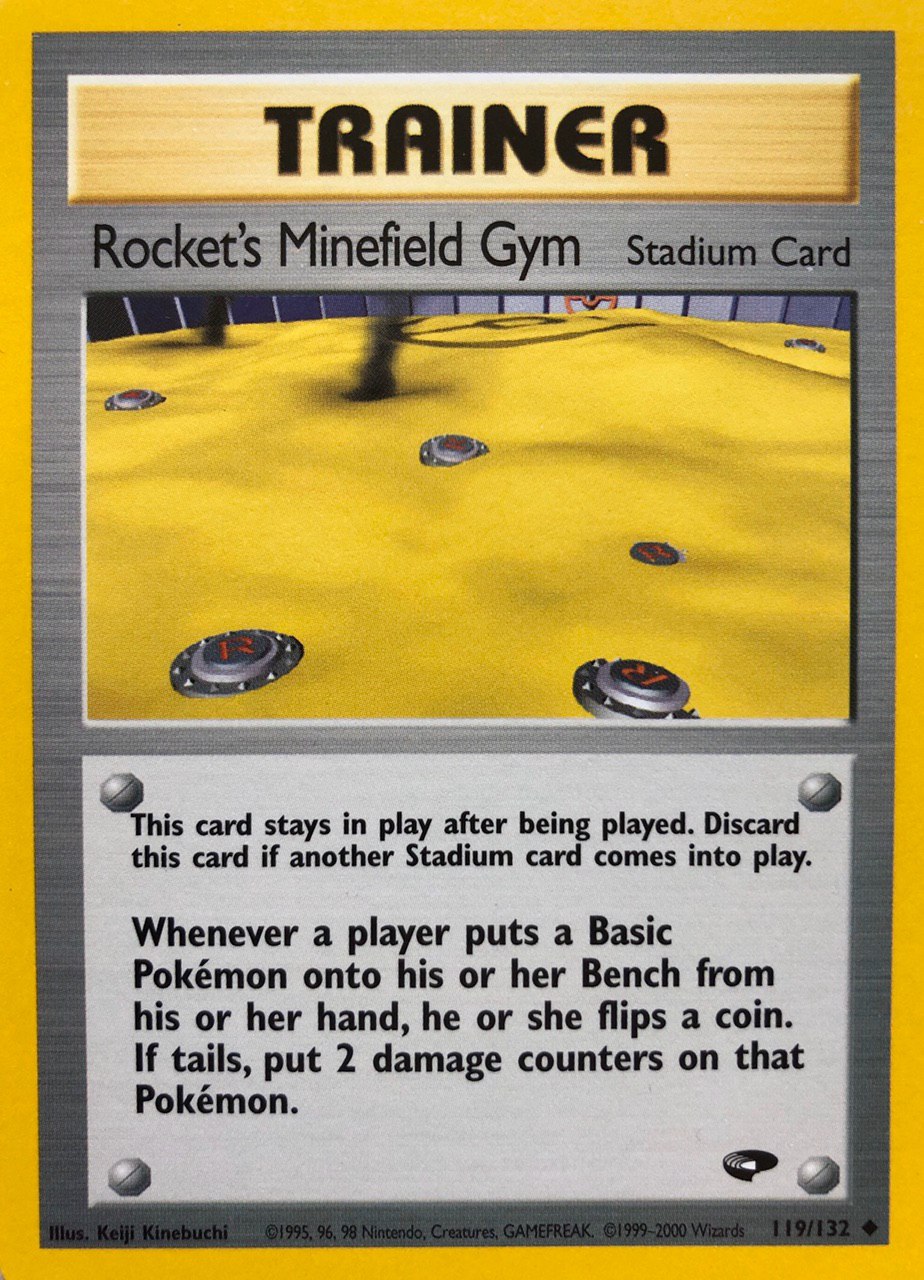 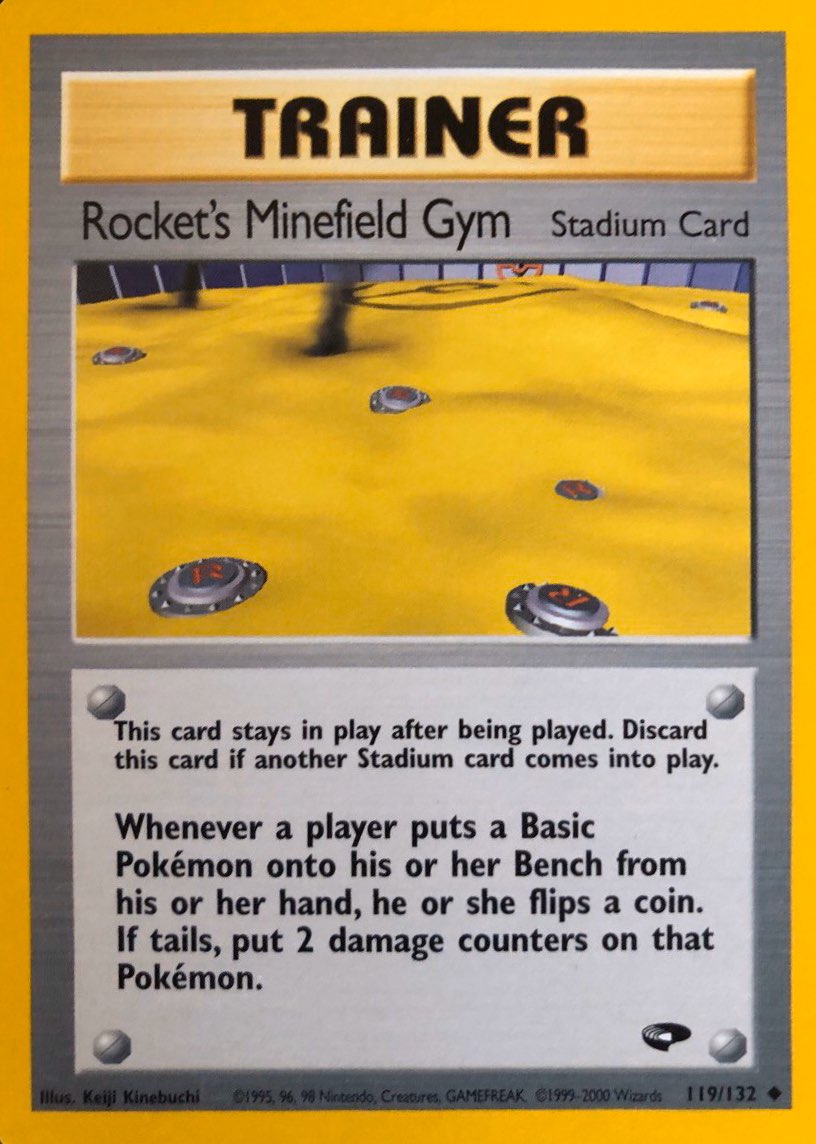 Here’s two scans of the corrected version of Rocket’s Minefield Gym that was printed in later Gym Challenge packs. (The top one is brighter.) Can we use this image instead of the one with the error?

Done, I’ve replaced the images on the server. Thanks for providing the updated scan. 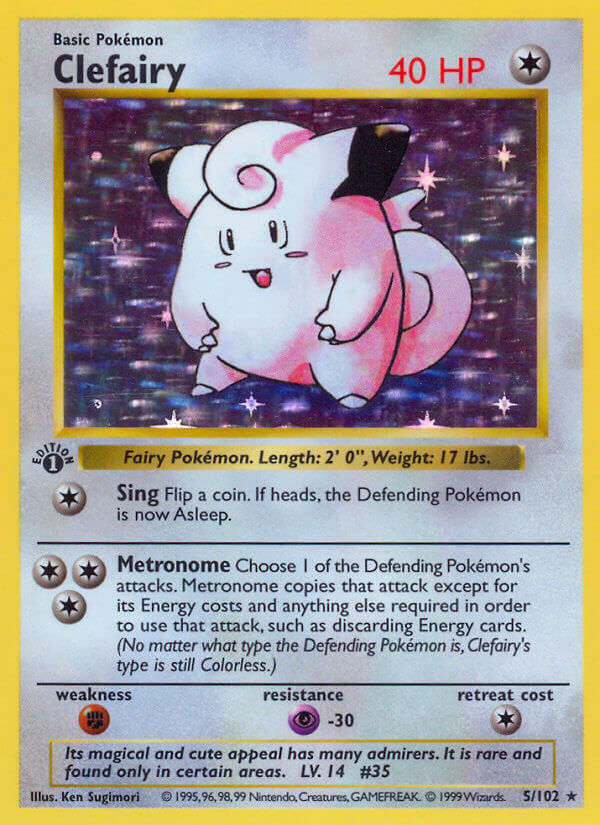 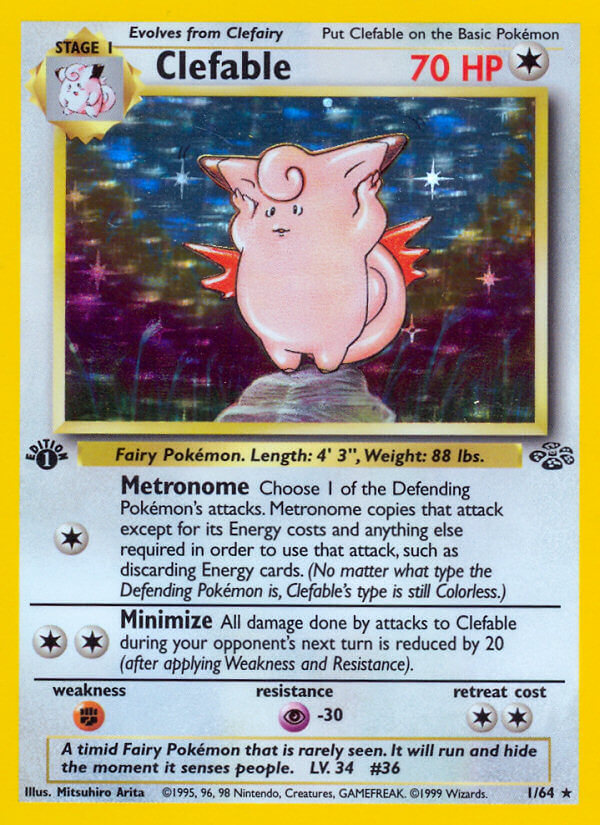 Metronome was mistranslated on both Clefairy and Clefable. While it does allow you to attack without the regular amount of Energy an attack requires, you must still do anything else required to use that attack, such as discarding Energy cards. The Japanese text emphasizes this, while in English, the translation was botched to clarify the exact opposite. This means that if Clefable used Metronome to copy an attack like Charizard’s Fire Spin, Clefable would still have to discard two Energy cards. If Clefable did not have two Energy cards attached to it to discard, the attack would have no effect. Future versions of Metronome-like attacks, like Togetic’s Super Metronome, included the proper translation. 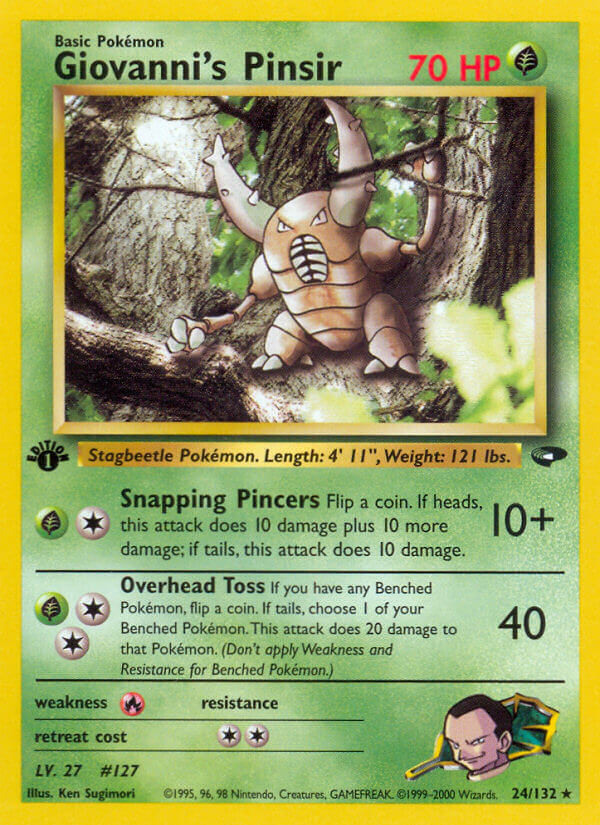 Snapping Pincers should do +20 on Heads.

Also, was there something wrong with Magby (Neo Genesis)? I overheard something about a Magby ruling back in the day.

Magby was translated correctly, but was the subject of two botched rulings. The first was that its Sputter effect would end if Magby was knocked out or benched. The second was that Sputter would not stop come-into-play Pokémon Powers, such as Dark Crobat’s Surprise Bite or Entei’s Howl. (Muk’s Toxic Gas was also ruled this way.)

These terrible rulings (and many others) were the result of Wizards of the Coast not being in constant contact with Japan and also relying on employees who specialized in Magic: The Gathering to make rulings for Pokémon.

Today we of course know them to be wrong, but for a significant portion of time, these were official rulings used at tournaments. TCG ONE fortunately already has Magby and Muk programmed to work correctly; they will always stop all Pokémon Powers.